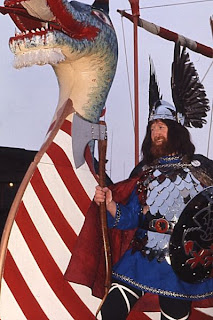 The Jarl of the Up Helly-Aa Fire Festival on the Shetland Islands, Scotland
This Nordic fire festival ( picture above) that takes place all over the Shetland Islands north of mainland Scotland in mid-winter which usually happens on the 30 January each year. It is believed to be THE largest fire festivall over Europe and represents the end of the Yule season. There is nothing "Scottish" festival with its origins in Nordic/Viking culture of the earliest inhabitants.
There is a committee who pick a "Jarl" or what the mainland calls an ear, complete with has his own squad. One of the more famous Jarls of Scotland was William St. Clair who built the famed Roslyn Chapel, mid-Lothian. The "Jarl" leads his company of "guizers" who are all dressed in Viking garb of old as both Orkney and Shetland carrying torches through the town toward a full Viking galley and are joined with other squads in other themes to march in the torchlight parade.
In Lerwick which is the largest of the festivals, the galley is lit on fire to the cheers of the crowd. But in other areas on the islands the galley is lit and then set afloat in the traditional Viking burial custom.
After the burning of the galley the squads of "guizers" visit all sorts of community locations and then go on to have a private parties to celebrate that winter is half way over. Each of the guizer squads choose different themes .which can be historical, ethnic c or cultural themes from modern pop culture. The following are some of the guizer squads...
Britain's Go Talent
Star Trek
A great way to break up the dreary Scottish Winter.
Jody
Posted by Jody at 9:01 PM 6 comments:

I know this blog is supposed to deal with all things Scottish and I promise not to disappoint. Despite the content of this posting I will show you there is a connection between the University of Wisconsin and Scotland… wait for it.

This is an exciting week because our University of Wisconsin Badgers will be representing the Big Ten in the Rose Bowl football game on New Year’s Day. Though the Badgers are no strangers to post season bowl games, earning the right to participate in the Rose Bowl for the first time since 2000 is exciting. Wisconsin has appeared 7 times at the Rose Bowl with a record of 3-4 with their last win in 2000 against Stanford. With a student body of about 49,000 students, the campus is the “premier” public university system in Wisconsin. As an alumnus of the university that is the ugly stepsister to this school, University of Wisconsin-Milwaukee, the University of Wisconsin has never had to be designated by its city… Madison (or the People’s Republic of Madison). The following is a bit of an introduction about University of Wisconsin that is known for so much more than just football. Their football program aside, they are a noted powerhouse in Hockey bringing home the national NCAA title; 6 years in the men’s program and three in the women; one year 2006 when both the men and women held the NCAA title with a brother and sister on each team respectively. They have also earned 8 NCAA titles in Boxing, 1 in Basketball, 7 in men and women’s Cross Country, 1 in men’s Soccer, and 1 in Track and Field. The NFL has had hundreds of former Wisconsin students in their ranks as has the National Hockey League, Major League Baseball and even Basketball. And if you take a look at the last two Olympic women's hockey teams from the US and Canada you will find many former and current players who are members of or were past menbers of Badger Hockey women hockey teams.

Sometimes Wisconsin is nicknamed the “Alabama of the North” but having attended college in Alabama I can assure you that getting in to the University of Wisconsin is much more difficult. And like the excellent university it is has a lot of pride in the accomplishments and contributions of its alumni: (to name but a few)

And then there is their world renowned Marching Band…

And now what is the Scottish connection?

Well while working on my latest project I have been researching the history of the Scottish Earl of Morton, who was Lord Dalkeith before he married a Stewart princess in 1458. As part of the research I have been looking at all the possible holdings that the Earl and subsequent family members may have had in Scotland. Well there was a Dalkeith Castle from the early 12th century held by the Graham clan and then in the 14th century by the Douglas family of which James, Earl of Morton was a member. 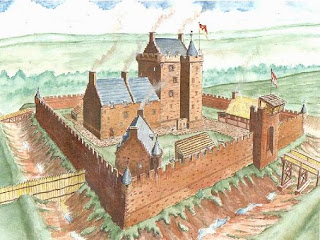 Dalkeith castle as it may have looked like in 14th century
In 1548 a new castle was built by the Regent Morton but was later sold to the Scott family (Duke of Buccleugh) who have had it ever since. The new castle is a palace that was built for grandeur and not defense. As the Buccleugh family has not lived in the palace since 1914, the palace has been used during WWII by Polish troops stationed in Scotland, and in the early 70’s and 80’s it was home to a computer company. However in 1985, Dalkeith Palace was leased to the University of Wisconsin’s study abroad program and has been home to about 80 students and staff per semester ever since. The program is in cooperation with the Scottish parliament where students work with members of the Scottish parliament as student interns. At the moment this is an undergraduate program, but I hope in the future it will be open to graduate students. 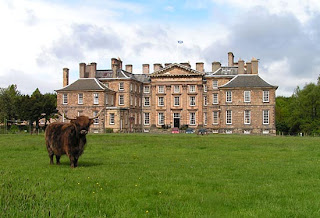 On Friday’s post I will be sharing the story of one of Wisconsin’s most notable alumni who began life in Scotland, naturalist John Muir.